From Vanagon Wiki
Jump to navigation Jump to search

This modification has been tested in Mr Squirrel's 1984 Westfalia, Mellow Yellow. Wiring differences between camper versions and standard version of Vanagons as well as changes made to the wiring over the years by Volkswagen and Previous Owners makes it essential that you don't trust any of the information here, and verify your own van's wiring before plunging in.

Mr Squirrel is not as smart as he wishes he was and has found on more than one occasion that he forgot to turn off the lights. So he put together this warning buzzer. Here's how it goes:

I wanted to find an easy way to wire a buzzer into the van without cutting wires, which means I was limited to working on the fuse panel. So I hoped to find a pair of fuses that could power a small 12VDC buzzer when the ignition is off but the headlight switch is not.

With my trusty voltmeter, I built a "truth table" of fuse voltages, as shown here:

Truth Table for my 1984 Westfalia ONLY. Ignition Key is shown in OFF and ON positions, Headlight Switching is shown in four conditions: Main switch OFF (0), Main Switch set to middle, parking light position (1), Main switch set to ON (2) position and beams set to low, and with beams set to hi. Voltages on the fuses measured under all eight combinations, a "0" indicating no volts, a "1" indicating 12 volts. Build your own truth table for your vehicle before proceeding.

The condition for when I wanted the buzzer to sound was when the ignition was off, but the light switch NOT off. This is shown in the green section of the table. Next, I needed to find two fuses: one with power under these conditions, and second with no power under these conditions. If I could find such a pair then I could connect the buzzer between them. As can be seen, Fuses #1 and #2 are powered while Fuses #10, #11, #12 have no power in the green section.

So I have my candidate fuses.

Always disconnect the battery ground terminal before fussing around with the electrical bits.

These instructions assume that you know how to drop the fuse panel and know how to work around the electrical bits.

Crimp insulated female quick disconnects to each of the buzzer's wires.

Disconnect the battery and pull the fuse panel; work it around so  the backside is accessible. I had to remove Relay #19 to get to the rear of Fuse #12.

Reconnect the battery and check for sounding action, in case a crimp has been fumbled.

Use the double-sided tape to affix the buzzer atop one of the relays. 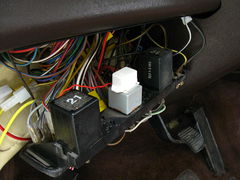 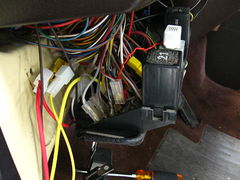 Note: Mr Squirrel is aware that it is not clear how exactly the buzzer finds a path to ground when Fuse #12 is unpowered. But the buzzer only requires 15mA to operate so something is working.

For another way, on 1986 and newer models, see this procedure.